Many times he was jury member to judge the works of academy students. Lectured at Universities and organized an international symposium in collaboration with Prof. Kitty Zijlmans at the University of Leiden. Translation workshops in collaboration with Prof. Theo Maarten van Lint in Pembroke College, University of Oxford.
Organized workshops in academies and gave lectures (with a.o. artist Marlene Dumas, writer Kader Abdolah).
Collaborated with poets/writers Bert Schierbeek and J. Bernlef and the composers Calliope Tsoupaki, Vanessa Laan and Artur Avanesov. Fanny de Ruiter, Christoph Ostendorf.
Collaborated with international artists by organizing workshops. Each year the collaboration was with an artist from another artistic discipline - music, dance, poetry, architecture, film.( Vanessa Laan, A.Takenushi, H.Khachaduryan, Corry van Binsbergen/Toon Tellegen, Ashok Bhalotra). Each time the result of the workshop was presented in an exhibition, with performances.

In collaboration with young artists, organized an international project as well to promote their work (Armenian artists), Artist in residence - with composers/musicians Artur Avanesov (Armenia), Fanny de Ruiter (The Netherlands). Artur Avanesov set one of Krkor's poems to music, which was performed during the realization of the project: Three concerts in The Netherlands (museum De lakenhal, Leiden, a.o.) and three concerts in Armenia (Aram Khachadurian house museum, a.o.).

Collaborated with the composer Christoph Ostendorf from Berlin in several 'Berlin projects'. Three of Krikor's poems were set to music by Ostendorf and performed during concerts in Oxford and Berlin. During one of the concerts in Berlin Krikor performed as a poet artist reciting his own poems.

Krikor organized also three major exhibitions simultaneously in three museums in The Netherlands, presenting Armenian art from three major museums in Armenia. Being also invited as curator as well as participating artist of the modern contemporary exhibition: ‘The encounter’ four contemporary artists from the Diaspora (among them, Atom Egoyan), in the Stedelijk Museum De Lakenhal in Leiden, The Netherlands. The other two museum were RMO, Museum of antiquity showing the top pieces from the Museum of Antiquity in Yerevan, and Museum Catharijne Convent showing the top manuscripts from Madenataran of Yerevan and also relics from Etchmiadzin.

Collaboration with Prof. Theo Maarten van Lint in the realization of translation workshops of his poems from Armenian into English at Pembroke College, University of Oxford. The result of this 'Oxford project' was an exhibition of his artworks in The Pembbroke Art Gallery with the presentation of the two publications "Wanderings'. One book about his poems and the other one about his artworks.
Presentation of his 'Artist's Book' Ode to Life! Կենաց at the Bodleian Library, University of Oxford.
a.o. projects and lectures at Art academies, Museums and Universities.

Krikor has always given painting lessons combined with art history in art centers and in his own studio, starting from the beginning of his professional career as artist in The Netherlands, in 1979.

2022
Exhibition and official presentation - at the University Library of Bologna (BUB) of a unique example of the ‘Artist’s Book’ Ode to Life!. which will be part of the prestigious collection of the BUB, with some other original works of Krikor. With gratitude and thanks to Prof. Anna Sirinian for this exhibition and the presentation. Also Thanks to Dr. Nerozzi and Dr. Federico Alpi and all who contributed. Simultaneously, the book – Letters to Vincent / Brieven aan Vincent, will be presented.

2020-2022
New Project - 'Letters to Vincent'/ 'Brieven aan Vincent'. A special publication, with the texts from the diaries of Krikor, 'corresponding' with Vincent (van Gogh) for the last 43 years, from the moment he left Paris definitively to start his life as a professional visual artist and poet in The Netherlands. The presentation of the publication will be held in museums and Universities.

2018
Berlin Project, in collaboration with the composer Christoph Ostendorf, Berlin
Performance by reading own poems during the concert and the Release of the new CD of Univocale,
'The World of Dido'

2017
Exhibition at the Bodleian Libraries, University of Oxford
Redesigning the medieval book

2016
Participation (as artist-poet) to the International Symposium/Conference Western Armenian in the 21st Century,
Armenian Studies, University of Oxford, UK

2016-2015
Participation as contemporary artist to the exhibiton - 'Armenia, Masterpieces from an Enduring Culture,
Bodleian Library, University of Oxford

2004
‘Enter at your own risk’, Arti et Amicitiae, Amsterdam, The Netherlands

2001-2002
‘The encounter’ four contemporary artists from the Diaspora, videofilm and exhibition in the Stedelijk Museum De Lakenhal, Leiden, The Netherlands

2010
Assignment for a painting for the new Building of Ponsioen Installatietechniek, Alphen aan den Rijn, NL

2000
Monumental painting for the SPREY building in Alphen aan den Rijn, The Netherlands

1991
Assignment for a sculpture and painting for the ASPA building in Zoetermeer, The Netherlands

1990
Assignment for a wall sculpture for the DISSAM building in Utrecht, The Netherlands

1989-1990
Wall paintings in the Armenian Church in Amsterdam, monumental building dating to 1713

1989
Assignment for a sculpture for the ASPA building in Apeldoorn, The Netherlands

2016
'Wanderings This is all We', a new book about his artworks, collaboration of Prof. Theo Maarten van Lint and Doris Wintgens Hötte,
curator of museum De Lakenhal, Leiden. Publication, Momdjian Foundation

2010
Cees Straus, The painter of search for happiness´, Trouw, newspaper, The Netherlands

2003
Newsletter ‘Armenia: Beyond territory. The evolution of the individual living in the diaspora‘, University of Leiden, The Netherlands 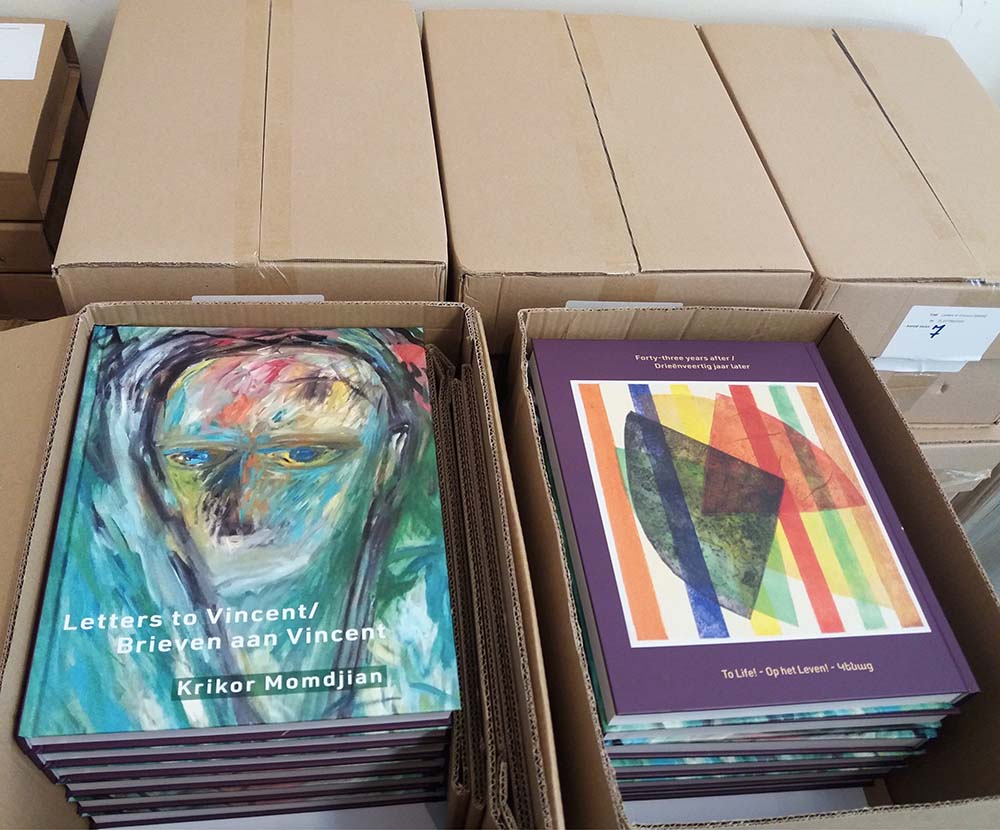